The British SPIDER-MAN weekly clocked-up a highly commendable 666 issues (it would have been a few more if the January 1979 strike hadn't suspended publication for a few weeks and don't even bother looking for issue 428, see here for why) but, for many readers, issue 633 (or - possible - 644, the first issue in the new format) marked their last dalliance with the British edition of the web-slinger.

It was already getting harder-and-harder to find copies in newsagents on a regular basis and I remember that I had to resort to getting a copy specially ordered and reserved by the newsagent to ensure a copy (and - even then - there was the occasional week when, for whatever reason, that didn't happen).  In retrospect, that was a sure sign that things weren't well at the Annex of Ideas.

1983-85 had seen a couple of hasty format changes as Marvel switched page size, print and paper quality, page counts and colour interiors before settling on this format which used the cheapest of 'glossy' paper and had a mix of colour and black & white pages throughout.  Coupled with some shoddy production work, it didn't make for the most attractive of reads.

The old editorial team had bowed-out a week earlier, just after ushering in the black costume and dispatching, and returning, Spidey to (and from) the Beyonder's SECRET WAR.  This issue is a blatant place-holder, burning-off a far-from-classic complete Spider-man adventure (the cover is all the hint you need about this adventure, The Spectacular Spider-Kid, from US AMAZING SPIDER-MAN 263) whilst waiting for a complete relaunch, as the more juvenile THE SPIDER-MAN COMIC, from the next issue.

The thinking was that British readers had almost entirely fallen out of love with Marvel's superheroes and Redan Place were taking the company in a new direction, based on licensed properties, and (largely) leaving behind their own characters.  With the imminent launch of MARVEL SUPER HEROES SECRET WARS (technically another toy tie-in), Marvel must have figured the small remaining readership would shift their allegiance to the new fortnightly (how could you resist the bulk of Marvel's heroes and villains in a massive wrestlemania ?) leaving SPIDER-MAN high-and-dry.

The page of House Ads shows the fork in the road for readers.  Superhero fans should follow the new launch whilst fans of - ahem - FRAGGLE ROCK should stick around.  It also demonstrates the increasingly obvious lack of attention to detail by claiming the first relaunched issue was "on sale now".  Despite seeing that ad in this issue, and other Marvel UK books, I still wasn't prepared for the horror that awaited me.  The AMAZING FRIENDS adventure turned-out to be a hard-to-find promotional strip, produced as a newspaper insert for a Denver department store.  It's nice to see something rare reach the UK but the reproduction was so poor that it was obvious that M-UK was working from printed copies of the American edition and not even the original artwork.  Things got worse later when the Spidey strip settled into a regular run of seventies SPIDEY SUPER STORIES reprints, complete with afros, flairs, crappy super villains and blatant educational lecturing. 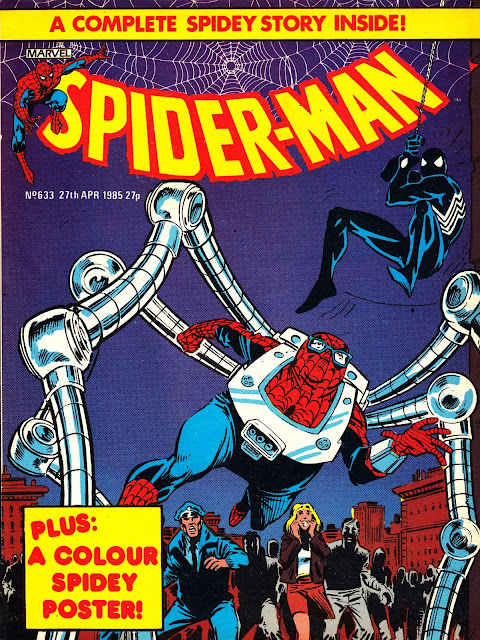 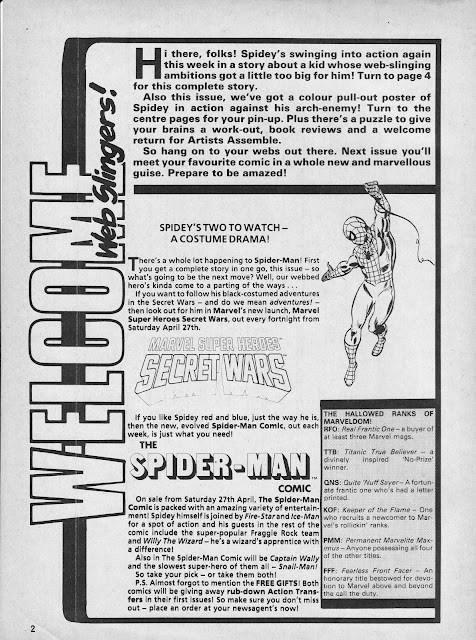 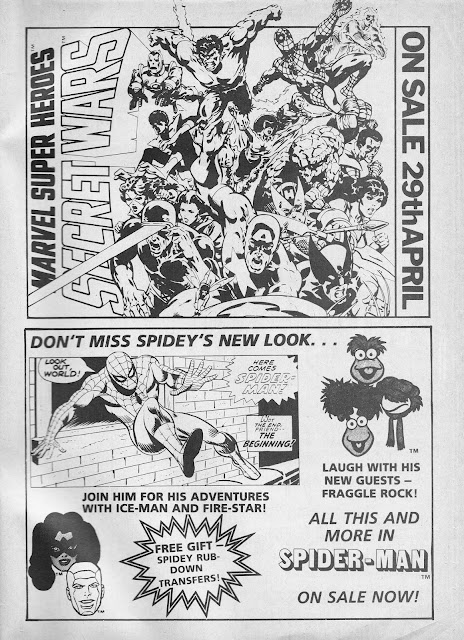