From 1975: Relaunch alert!  VALIANT gets a last-ditch reboot as sales drop through the floor.

It doesn't even rate a mention on the cover (it's one of the other 'two exciting new stories' starting this issue) but this is the first appearance of tough cop ONE-EYED JACK, the DIRTY HARRY-alike recently returned to the streets in a new collected edition from Rebellion.  Readers of the EAGLE in the 1980s will remember the curiously-dated cop as well.

The relaunch, under the watch of John Wagner, was a creative success but couldn't reverse falling sales.  The weekly, launched back in 1962, folded into BATTLE the following October after 730 issues... taking OEJ with it.

Spin-offs included the usual annuals, specials and the VALIANT PICTURE LIBRARY (an in-name-only spin-off) launched in the summer of 1963. 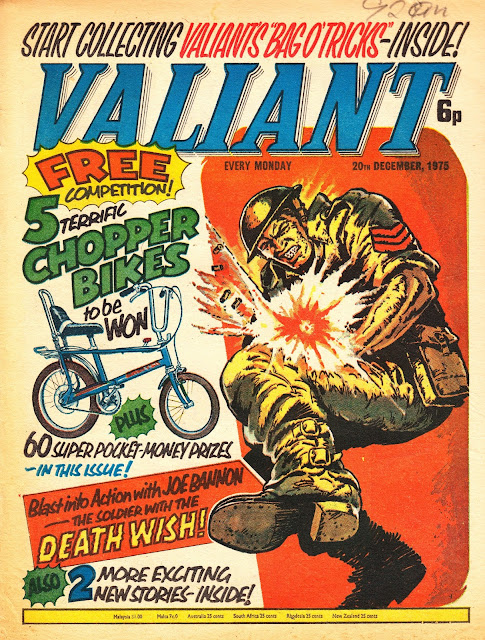 Email ThisBlogThis!Share to TwitterShare to FacebookShare to Pinterest
Labels: 1975