Buyers of MARVEL UK's 1986 weeklies will be familiar with this one... the (empty) album came bagged with copies of SECRET WARS II issue 66, SPIDER-MAN AND ZOIDS issue 31 and TRANSFORMERS issue 81.  All cover-dated 4 October.  So, if you were a True Believer, there was a good chance you ended up with three of the things!

The following week's issues all included a packet of stickers to help fuel the addiction.

The timing of this one seemed a bit weird back-in-the-day.  MARVEL UK was deep into the sprawling SECRET WARS II saga (the weekly switched storylines, and title, from issue 32) and the original Battle World romp seemed a little like ancient history.

Secret Wars - probably because it lacked the support of an animated series (although this album did briefly spark playground rumours that one was on its way) - never became the same mass marketing event in the UK that it was in the States... but we did get some spin-off merchandising, including the Mattel action figures that sparked it all.

As for the album itself: it basically takes the Jim Shooter-created premise of the original limited series and fleshes it out with more events, as illustrated in the not-seen-in-the-comics page below.  Maybe Shooter should get more credit for creating a scenario where - in theory - the heroes and villains could encounter an unlimited number of new threats and challenges.  Much like the we're-on-a-quest SF shows of the 1970s.  Except they never seemed to last long.

The artwork is uncredited throughout.  The panels are not lifted directly from the comics so I assume they were probably done by one (or maybe a team) of jobbing artists somewhere.  It must have kept them busy for a while... which may explain the relatively late launch.

The events of the sequel are - possibly because it was something of a sprawling mess - ignored.

The giveaway didn't seem to have much of an impact on my peers.  Unlike the TRANSFORMERS album given away earlier in the year, no one I knew (including me) bothered with this one.  Maybe it's because superheroes weren't quite as cool in the mid-eighties or maybe it lacked the all-important shiney cards (a gimmick nicked from football sticker collecting).  The art - whilst cool - couldn't compete with actual animation stills as seen in the TF collection.

Marvel Productions did - btw - punt the idea of a Secret Wars animated series to the US broadcasters but couldn't find any takers.

This isn't one of the three albums I ended up with that week.  All are now long-gone.  I found a completed copy (result!) in a store and couldn't pass up the chance to finally own it. 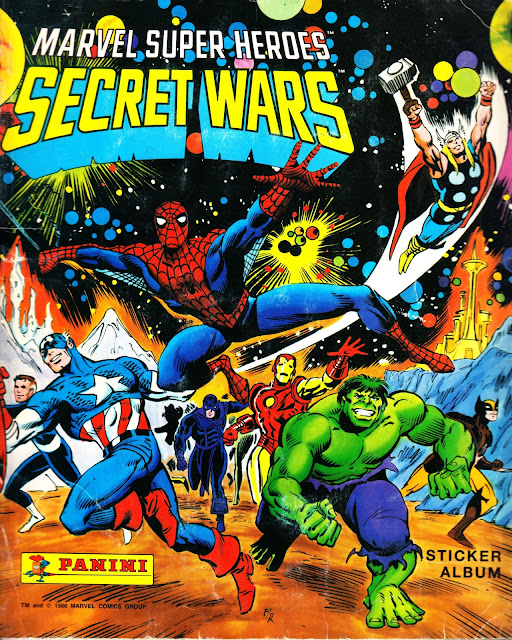 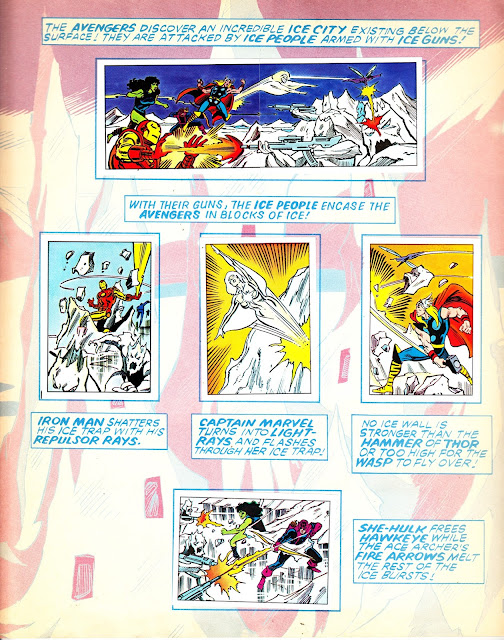