From February 1994:  This is an oddity that completely passed me by at the time and I only discovered by chance in a shop's back issue boxes relatively recently... SIG: THE OFFICIAL SUPERMARIONATION MAGAZINE issue 1.

Yup, it's an officially sanctioned by ITC glossy magazine devoted to the puppet shows of Gerry Anderson which - of course - were enjoying a resurgence at the time thanks to reruns on the BBC.

This was far from the first magazine devoted to Anderson's work but it might well have been the first officially licensed (rather than a fanzine endorsed by ITC or Anderson himself) one intended for a mainstream audience.

Unfortunately, it was published by Phoenix, the fly-by-night outfit that also published the ALIENS, TERMINATOR, INDIANA JONES, STAR TREK and FREDDY'S NIGHTMARES comics and magazines during this period.  Quality control (and indeed permission of the copyright holder) weren't always their top priority.  This is - much like their unofficial FINAL FRONTIER magazine (once they los - or stopped paying for - reprints of Starlog articles) - a thin selection of features (don't expect anything along the lines of what S.I.G had been publishing) alongside lots of glossy photos of puppets and hardware.

The weird cover layout isn't a major fail (although it is pretty high on the STARLOGGED 'That'll do' scale... and what's with the crappy, almost non-existant, masthead?), I scanned it with the free Stingray postcard obscuring part of the cover.

I have no idea if this ever made it to a second issue.  Based on the strength of this one, and the very few copies that seem to be out there, I would assume not. 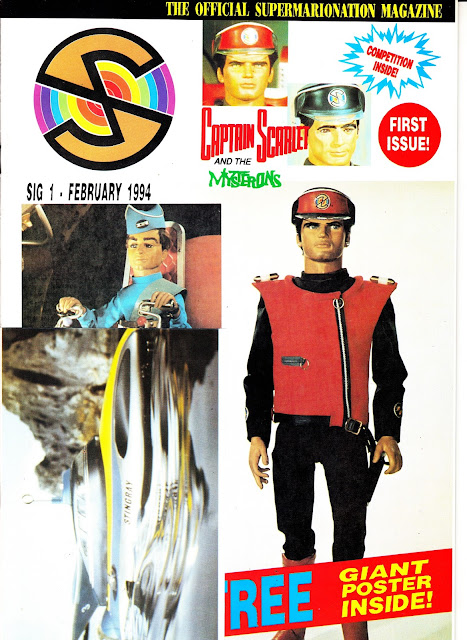