From March 1985: The end of the dirt track for IPC's venerable TIGER.

Published weekly (barring, no doubt, the odd bout of industrial action) since September 1954, the sports-centric 'paper' was a mainstay of the IPC Youth Group offering for decades and ultimately clocked-up 1555 regular issues and who-knows-how-many spin-offs.

Along the way it spun off ROY OF THE ROVERS into his own weekly in 1976 and - as was the IPC way - also absorbed a lot of its own, more vulnerable, sibblings.  HURRICANE, JAG, SCORCHER and SPEED all shared the masthead at some point.

Unusually, the combined EAGLE AND TIGER ('Big news for all readers...') was a pretty balanced combination of the two weeklies.  It really felt like someone in management thought TIGER deserved a fair send-off.  Of course, over time, the TIGER strips started to fade away and the shared masthead became smaller and smaller... and eventually (and with no fanfare) vanished entirely.  The Tiger logo was even redesigned for the merger so that it sat neatly alongside the Eagle's.

I was never a fan of TIGER so the merger - whilst a bit of an event - wasn't 'great news' for me.  Indeed, the likes of Star Rider and Golden Boy were strong clues as to why Tiger was no longer in business.  I had only ever bought one copy, published the previous summer, which just happened to be the week that BATTLE, EAGLE and TIGER all gave away free ACTION FORCE figures.  Palitoy's purge of their warehouse overstocks is still, officially, the Best Free Gift.  Ever.  I probably ended up with several copies of that week's Tiger (I was already reading the other two) but I don't remember actually reading any of it.  But I recently bought a copy of that very same once-owned issue (with convention-busting Billy's Boots cricket cover!) with the intention of finally getting around to dipping in. 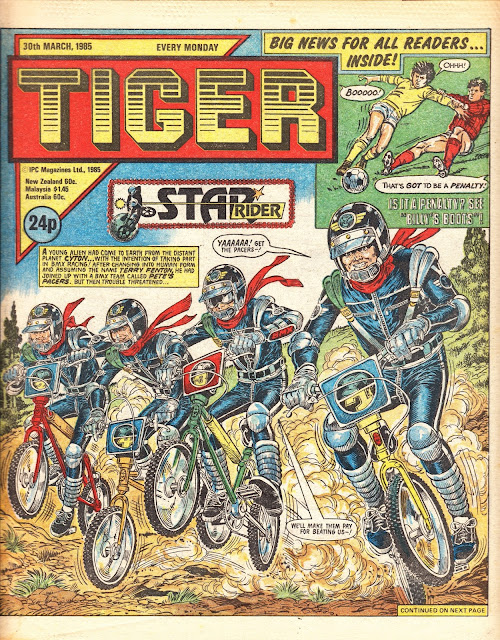 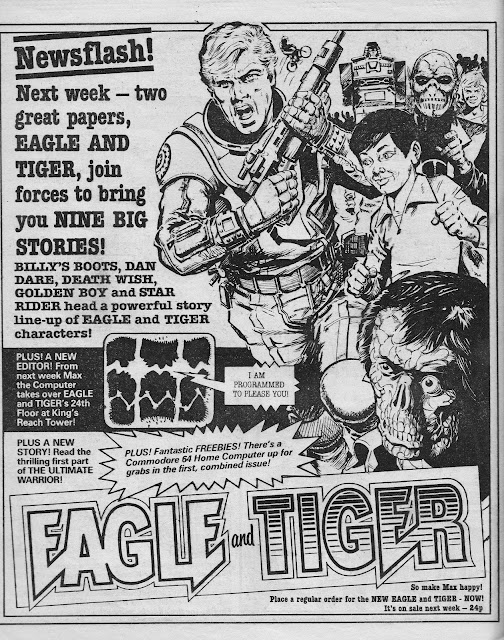