From March 1988: POWER COMICS issue 1, another title (see also: the recent JAMES BOND post) that emerged from the tie-up between Britain's Acme Press and Eclipse over in the States.

This one was a genuine oddity: reprints of early work by Dave Gibbons and Brian Bolland originally created in the 1970s for export... to Nigeria!  The principle character was - originally - Powerman but the lawyers spotted a potential snag with that so he was renamed Powerbolt for these reprints.

The strips, written by Don Avenall and Norman Worker, first appeared in the bi-weekly POWERMAN comic published by Pikin (or was it Pican?) Publications.

I have no idea about how Bolland and Gibbons felt about their early work resurfacing after they had broken through to the mainstream.

I wonder how well they managed to capture Nigerian life and sensibilities... I can't help suspecting that this is the Nigerian comics equivilant of our very own Gen 1 CAPTAIN BRITAIN... an overseas creation pitched at a foreign market put together by creators with little or no first-hand audience about the place or the audience.

They got the gig because, traditionally, Nigerian comics had been imported from overseas and the publisher saw an opportunity to create something more atuned to the local market and - importantly - featuring local characters.  But - and this is where the Brits come in - there wasn't a big pool of local talent to work on such a title.  The thinking was that - over time - a new generation of African creators would see an opportunity.

This four-part series has itself been out-of-print for nigh on thirty years.

It's not related to the 1960s Odhams Power Comics line which - mostly - repackaged early Marvel strips for the British market. 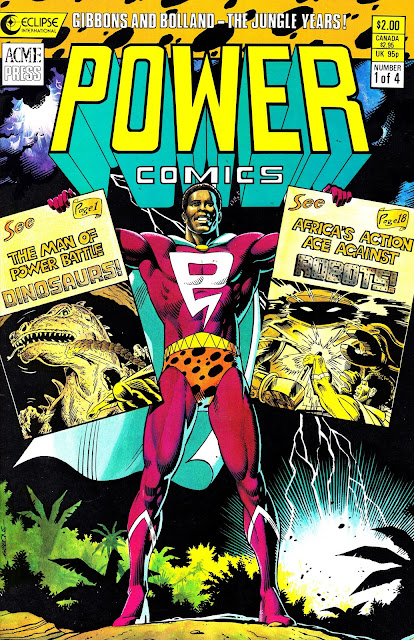