From October 1988: the first issue of Fleetway's new fortnightly WILDCAT.

This is something of a landmark title: not only was it the first time (as far as I know) that IPC/ Fleetway had launched an anthology where all the strips shared the same universe but also the last time that they took a punt on a boys adventure title that wasn't either based on an existing media property or spun out of one of their existing titles.

It's ambitious stuff with a top-notch creative team (Boix, Belardinelli, Ortiz, Pino, Smith and others) and a remit to do something different at a time when the boys adventure market was really on its uppers (even Marvel UK was discovering that a heavily promoted toy tie-in were no longer pulling in the punters in sufficient numbers to keep the lights on at a number of weeklies) and only toy tie-ins seemed to have any chance of survival.

The shared universe premise was not a million miles away from Glen Larson's late 1960s unsold effort Adam's Ark (which was drastically reworked a decade later to become BATTLESTAR GALACTICA): Turbo Jones predicts the impending destruction of the Earth in a meteor shower and constructs a space craft (the Wildcat) to whisk a select group of survivors off world in search of a new planet to colonise.  Cue: various alien-centric adventure built around the four main characters: Jones, Loner, Kitten Magee and Joe Alien.

The fortnightly was teased with the now traditional preview issue giveaway, bagged with copies of 2000AD, EAGLE and (presumably in an attempt to broaden the audience) WHIZZER AND CHIPS.  Only twelve issues appeared before a hasty merger with - predictably - EAGLE (issue 368, 8 April 1989).  Two further specials, now very hard to find, followed in 1989.  Unusually, these probably weren't just burning off unused inventory as the strips were also appearing in EAGLE every week.

There was also two Stateside spin-offs courtesy of the often rough-and-ready Fleetway Quality imprint: the Loner strips were collected into a US format title that clocked-up a not-to-be-sniffed-at seven issues in 1990-91. Turbo Jones: Pathfinder mustered a one-shot in 1991. Neither title is particularly easy to find in the 50p boxes. 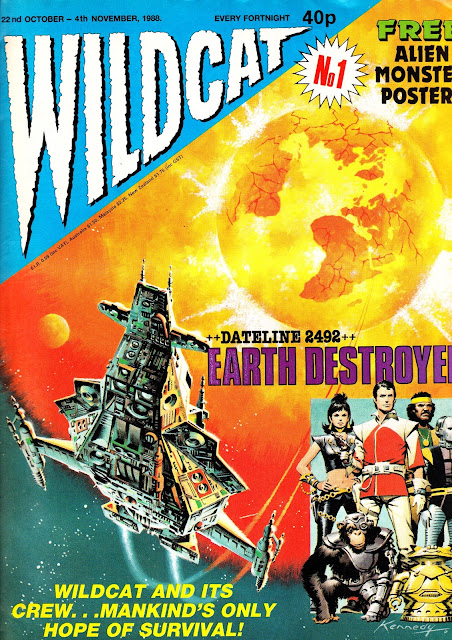 Email ThisBlogThis!Share to TwitterShare to FacebookShare to Pinterest
Labels: 1989, WILDCAT