From February 1987: the first issue of SENTINEL, a science fiction title published by Brit outfit HARRIER COMICS, owned and run by Martin Lock.

The conceit for this four-issue British indie title was that it presented news stories from the future.  It was one of the standouts from a publisher who often seemed to prioritise quantity and good intentions over actual quality.

Born of the black & white boom, Harrier launched with CONQUEROR, a STAR TREK wannabe with origins in Lock's days as a fanzine creator, editor and publisher.  I've blogged about that in STARLOGGED a long time ago.  A host of ongoing series and one-shots followed over the next few years.  Some boasted early work by creators who would go on to become well-regarded industry pros.  Others were a load of old tosh that almost certainly harmed the credability of the whole line.

The collapse in demand for b&w titles (once it became clear that the dreck far outweighed the quality... and the chances of getting rich over the next TEENAGE MUTANT NINJA TURTLES wwas basically zilch) sealed the fate of Harrier and Lock bowed out by the end of the decade.

Back issues sometimes pop up in the 50p boxes and I always make a point of grabbing any that I see. 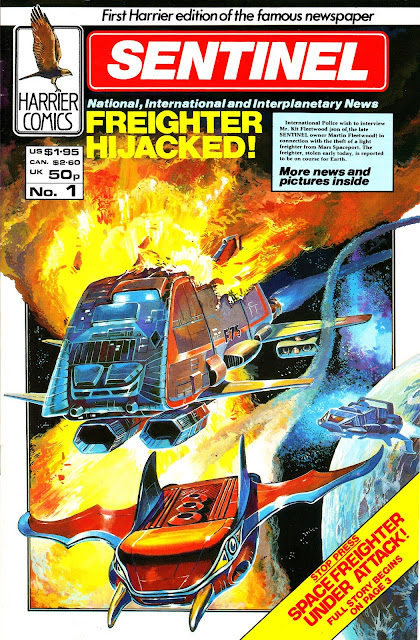