THE BEST CHILDREN'S TV OF THE DECADE VHS: THE 1980s

Last but not least: Here's Philip Schofield again, providing the links for this third-and-final straight-to-tape compilation of old British kids TV clips.  This time we're into Scofield's own era.... the 1980s.

This looks like it is a reissue as the packaging doesn't match the design of the previous two... or this tape was released after the others and - in the meantime - the line was overhauled and moved under the Pocket Money Video umbrella.

Kudos to the designer for making it look like something a kid could knock-up in under an hour.

Some of the shows featured actually had their origins in previous decades but I guess Watershed felt they could justify their inclusion here thanks to their periodic reruns by frugal broadcasters across the years.

These tapes, in their own simple way, were really the predecessors to Network's excellent range of LOOK-BACK DVDs.  Like the ITC Video TV HEAVEN tapes of the past, they took complete episodes of assorted ITV kids shows to allow you a nostalgic dip without having to fork out for a complete series-specific DVD.  They focused on the 1970s (some 1980s volumes wouldn't have gone amiss) but - even if you didn't see the shows first time around - are still great ways to dip into a whole era.  The only bummer: kids TV drama was often multi-part rather than self-contained so you don't get the full story.  Fortunately, Network has also released most of the dramas featured as individual series. 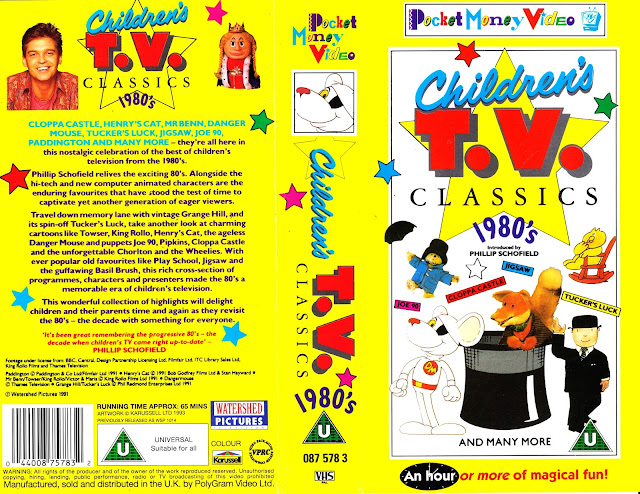