From March 1986: SPEAKEASY issue 60 cover features METALZOIC, the Pat Mills and Kevin O'Neil collaboration which first appeared as one of the early DC Comics graphic novels in the States before being serialised in 2000AD (progs 482-492) here in the UK.

The timing is right as I'm currently reading Mills' recolections of his time on 2000AD in the book BE PURE! BE VIGILANT! BEHAVE! which is now available as a print edition.  I find Mills to be rather too opinionated at times (he certainly has a lot to say in FUTURE SHOCK, now available in a swanky new BR edition from Arrow) but his writing here is most agreeable and it's hard to deny the creative force that he has been in British comics.  Indeed, his contribution is almost certainly still undervalued in the grand scheme of things. 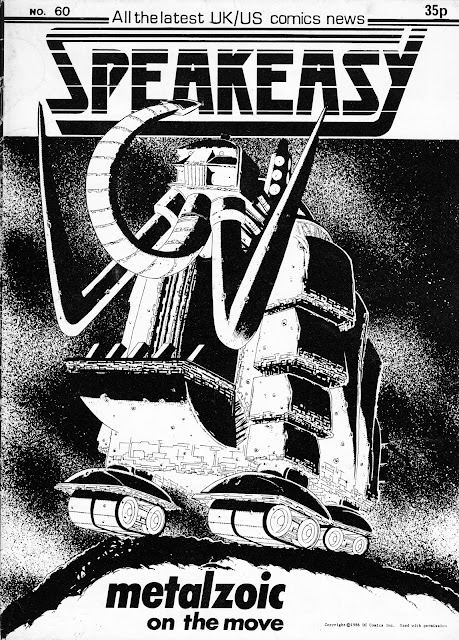 Email ThisBlogThis!Share to TwitterShare to FacebookShare to Pinterest
Labels: 1986, SPEAKEASY