I mentioned, in my last post, that Marvel UK's increasingly desperate looking Spider-man weekly, in its final guise as (shudder) SPIDEY COMIC, maximised the free ZOIDS toy promotion insert (which also appeared in copies of RETURN OF THE JEDI and SECRET WARS that week) by also reusing the artwork as the cover!

Yup, really!  They used a free toy-funded promotion as their cover design.  Was this a sneaky way of testing whether the Zoids created a sales bounce (god knows, the floundering weekly certainly needed it) whilst M-UK firmed-up plans for adding a regular Zoids strip to Secret Wars?  Or was this just a cash-strapped has-been scrimping on the cost of designing a new cover?  Hmmm.

Spidey Comic closed at the end of the year after 666 issues.  I can't imagine why. 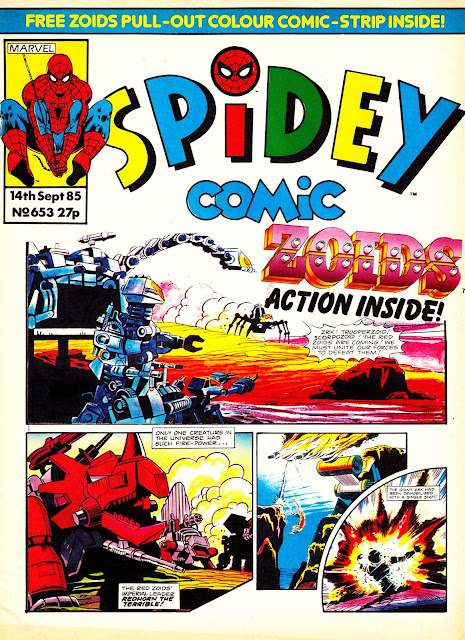