More Dredd!  This time from the very tail-end of Starlogged's period: The first issue of CLASSIC 2000AD (September 1995), yet another outlet for reprints from Tharg's repository of thrills.

C2000AD was the successor to the (far more successful) BEST OF 2000AD MONTHLY.  That had churned-out low-cost reprints for a decade and pretty much exhausted the back stock of black & white material from the venerable weekly.

This new launch featured colour interiors, allowing it to plunder more recent material from the weekly as well as Dredd's spin-off solo book.  I don't have every issue but - presumably - it also opened-up the possibility of pulling rarities from the various spin-off annuals and specials which had different page dimensions than the weekly and BEST OF.

Fleetway's other motive: C2000AD appeared, alongside a similar reboot for the 1992 launched THE COMPLETE JUDGE DREDD (reworked as CLASSIC JUDGE DREDD), just as the 1985 JUDGE DREDD movie hit cinemas.  Fleetway anticipated a sales bonanza and ensured they had plenty of shiny new product on the shelves (the kid-friendly fortnightly LAWMAN OF THE FUTURE appeared at the same time).

Unfortunately, the film was something of a flop (I'm going to stick my neck out here and say that - although it's no cinematic masterpiece - it's not a total train wreck either) and none of Fleetway's 2000AD family of titles saw much (if any) benefit from the association.  C2000AD shuttered after a mere 15 issues (compared with 119 editions of its predecessor), closing out in January 1997.  Its' Dredd companion managed another three issues: the 18th was the last (compared with 42 from the first run).

The lead reprint was America, the highly regarded JD strip that had kicked-off the Megazine five years earlier. 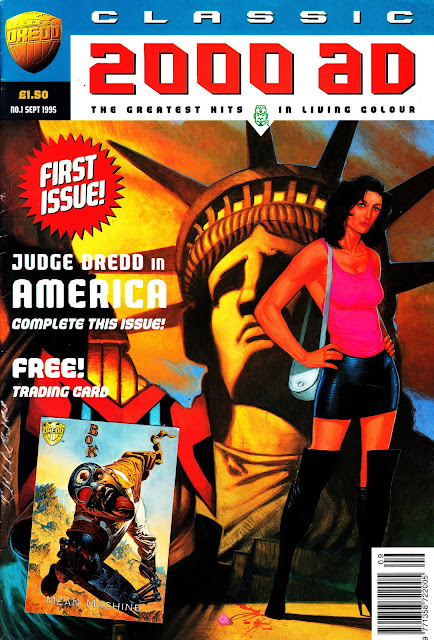 Email ThisBlogThis!Share to TwitterShare to FacebookShare to Pinterest
Labels: 1995, 2000AD