From October 1986: The MASK PREVIEW ISSUE, published by IPC.

This was a little bit of a comics landmark.  It wasn't the first IPC title to be launched with a free preview issue (that was - probably - OINK which started with a freebie copy given away with the other IPC humour weeklies in April the same year) but it was the first time that IPC had really embraced the idea of doing a boys adventure comic based on a toy line.

It wasn't the first of course.  BATTLE had featured ACTION FORCE from the summer of 1983 onwards (and fully embraced the tie-in from later the same year) and EAGLE had run ROBO-MACHINES between November 84 and July 85.  But those had been strips running in an established title... this was the first time IPC had followed the MARVEL UK model of devoting the whole title (or - at least - the bulk of it) to a tie-in.

The toy was, of course, a TRANSFORMERS/ G.I. JOE hybrid (secret agents and bumbling villains use cars with secret 'enhancements' to foil each other's plans) intended to snatch sales from the two Hasbro powerhouses.  There was also the obligatory cartoon/ extended plug which was syndicated in the States and shown - mostly at weekends - on TV-am here in the UK.

This preview was a nicely put together full-length teaser which includes the origin story for the MASK organisation.  A story untold elsewhere... but retold in the first proper issue of the fortnightly comic.  Indeed all the stories (probably put together for the in-house dummy) are original, leaving the DC strips from the States to appear in the MASK annuals instead.  It's printed on glossy paper (another first for IPC... who were mostly content with leaving their weeklies to languish at the bottom end of the production standards league table) with a fair few interior colour pages (but, unlike the standard MARVEL UK comic of the time, not full-colour throughout).

Management were clearly taking this opportunity to fight back against the British Bullpen pretty seriously.

Copies were bagged with issues of EAGLE, BATTLE ACTION FORCE and ROY OF THE ROVERS.

The ongoing MASK series was initially published fortnightly (Marvel had done likewise with THE TRANSFORMERS... not least because there was a shortage of material to reprint) but later - no doubt due to strong sales - switched to weekly.

The tone of the ongoing run was a little less serious than this pilot... especially compared with the TV show and rivals such as the aforementioned Robots in Disguise or ACTION FORCE.

MASK ultimately ran for 80 issues before going the way of most licensed comics... But IPC continued to show faith by folding it into EAGLE rather than instantly ditching the license.

As one might expect, the strips have never been reprinted although I suspect some of the strips that appeared post-merger in EAGLE had previously appeared in the main comic.

IPC - and then Fleetway - were a little hit-and-miss with selecting which toy lines to ally themselves with.  Possibly because Marvel and London Editions already had good relationships with most of the big toy makers and had first choice with new liceses.  SUPERNATURALS, a toy with a hologram gimmick, was also launched with a free preview issues but - without a TV show - couldn't recreate the MASK effect.  The unfortunately named RING RAIDERS (also a pants toy) couldn't take flight either. 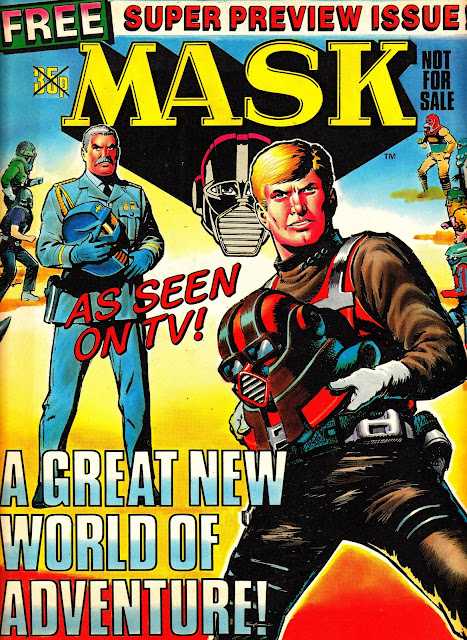 Email ThisBlogThis!Share to TwitterShare to FacebookShare to Pinterest
Labels: 1986, MASK