From August 1989: another EAGLE landmark... the return of the original DAN DARE.

It's safe to say that the new Eagle was ever quite sure what to do with their biggest brand.  The relaunch started with Daniel Dare, action-packed gandson of the original Pilot of the Future.  The reboot was partly down to the fact that a TV version of the character was in pre-production (the ATV series went nowhere because of changes within the ITV system... possibly a lucky escape as the plan seemed to be along similar lines to CAPTAIN ZEP: SPACE DETECTIVE) and partly down to trying to put some clear blue water between the incarnations.  As if kids actually cared... as long as the strip was good.

They even decided to mess around with the original from afar by suddenly making him a WWII pilot who was sucked into the future (ala the plot of the BIGGLES movie) by a Treen mishap.  Thus the Mekon accidentally created his own greatest foe.  Bad day in the office.

After The Return of the Mekon played out, the character and the strip seemed to get a little lost.  Subsequent stories couldn't match the epic scope of the first outing and it all became a little average.  They even teamed New Dan and Old Dan together for one adventure.  I forget how they did it.  One ill-advised reboot saw the character sporting a lot of Magnum-esque chest hair as a 'Space Commando'.  Surely Starfleet would not have approved.  Which might have been the point.

This particular reboot not only saw the original character return but also one of the original art team with Keith Watson taking over the strip.  It's unlikely, beyond novelty value, that kids cared but maybe Fleetway were hoping some nostalgic dads might grab an issue... and some nostalgic journos would devoite some time to the oft-overlooked weekly.

This is also the cover that the Dan Dare copyright holders are mostly likely to turf out whenever a Dare revival is mooted... and the press are happy to run with it. 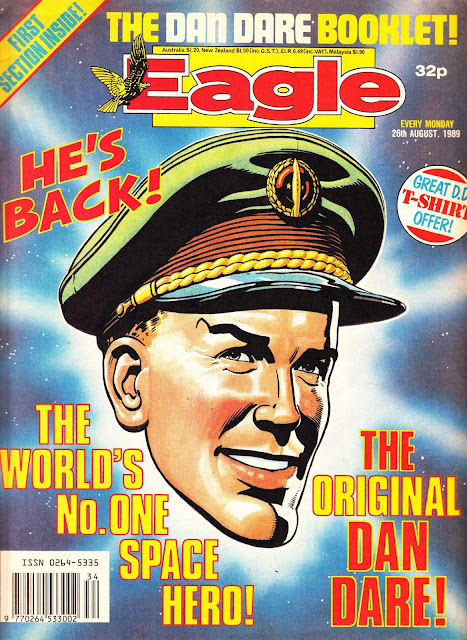