From the VHS era: More SAPPHIRE AND STEEL, this time in the form of the first volume (a double tape affair) of the ITC VIDEO releases.

It was so cool to see this on the shelves of OUR PRICE VIDEO way-back-when.  Not only was it a long-lost show that I fondly remebered from over a decade earlier but it also showed the potential for VHS to bring all sorts of old shows - previously assumed lost in the vaults forever with no chance of a repeat outing - back from the dead.

As we've seen in past posts (and will do again in the future) ITC (who had spent the previous decade cut loose from the ITV system and doing not very much) really woke up to the potential of the programme library they had previously been - for the most part - sitting on.

Despite being banished from the ITV tent by the early 1980s franchise round, which saw ATV and ITC split with the former being reinvented as Central Independent Television with a new ownership structure and renewed commitment to the midlands (part of the deal was that they had to sell Elstree Centre, home of many of the ATV shows), old ITV shows (mostly the Gerry Anderson ones) had continued to appear on ITV throughout the decade (FIREBALL XL5, in black & white, during the school holidays anyone?).  But these were mostly the high-end film series that were ITC's forte.  Far less likely to see the light of day again were any of the former ATV shows that had become part of the ITC library after the restructure.

Suddenly, in part thanks to some vintage repeats on Channel Four, ITC opened the floodgates with all manner of old shows suddenly hitting the shelves.  Some of the heavy hitters were initially off-limits thanks to existing licensing deals which - possibly - left some gaps in the schedule for the more obscure stuff.  TV Heaven was born.

As for this show?  I love it.  For the most part.  The two leads are great, the writing top-notch and the production and direction really make the most of the studio-bound nature of the series.  Indeed it feels weird when, in one story, they briefly decamped to the roof of the London headquarters of ACC, parent company of ATV and ITC.  The sedate pace would horrify viewers today... but it feels just right.

This isn't the most memorable story.  Some may argue that it is the one with 'the man without a face' (and it is genuinely great) but, I think for many, it is the second adventure: The abandoned railway station.  It suffers a little from being several episodes overlong but the atmosphere and drama is exceptional.  It was the stody that was in mid-run when - in 1979 - a series of local industrial disputes across the ITV network conflated into an all-out shutdown (except, where things are calmer, in the Channel Islands) which halted all broadcasts and production for ten week.  No programmes.  No adverts.  No income.  No TV TIMES And no other option than to watch the two BBC channels.  Those were the days.

Given such a long hiatus, ITV's schedulers opted to repeat the story from the start rather than rely on anyone remembering what had happened the best part of three months ago.

Other contemporary S&S merchandise included a novelisation, an annual (with new stories) and - most memorably - a great LOOK-IN comic strip. 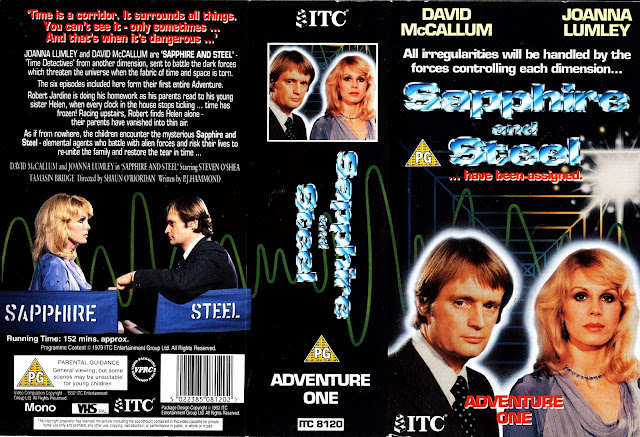