This is another hefty batch of cheap-and-cheerful IPC reprints which is gard to find today.  This issue compiled a run of Death Wish (nope, not Paul Kersey) strips.

Blake Edmonds was an F1 driver who had it all... until a crash left him badly burned.  Thereafter he took on any stunt or challenge - no matter how dangerous - because he had - yup - a death wish.

The strip started in 1980 in SPEED (from where, I suspect, these strips hail... making the mag even more collectable).  When that weekly went belly-up after a mere 31 issues the strip transferred to TIGER.  Thereafter it remained a mainstay until it transferred (along with the likes of Billy's Boots and Golden Boy) to EAGLE.  It continued to appear, albeit with a supernatural twist, long after TIGER was quietly dumped from the masthead.  He didn't have much luck for someone determined to die. 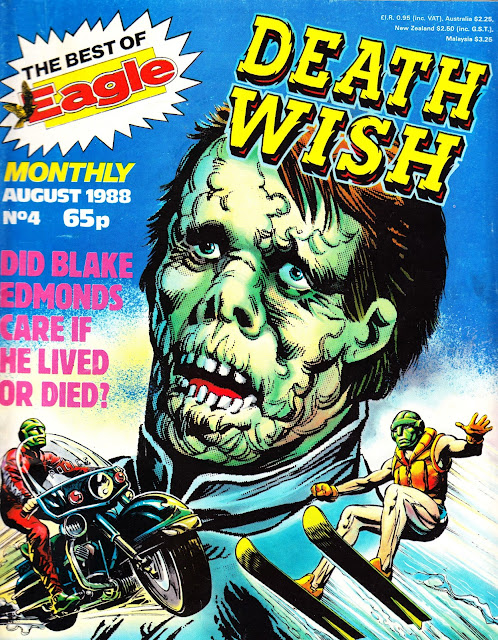 Email ThisBlogThis!Share to TwitterShare to FacebookShare to Pinterest
Labels: 1988, EAGLE