From 1978: another early STARLOG MAGAZINE preview for BUCK ROGERS IN THE 25TH CENTURY, including some seldom-seen pre-production art.

The piece gives a very different look to the nightime in Old Chicago scenes, the strongest and most memorable sequence in the debut movie.  It's interesting to see the very different visual look for Buck and Twiki as well as - to my eyes - some inspiration from the cantina sequence in STAR WARS (which, lets be honest, seemed to 'inspire' a lot of other SF producers for at least the next decade).

Interesting to note that this was published when the plan was still to deliver a three-flick deal to NBC (a similar deal to the one that Universal initially cut with ABC for BATTLESTAR GALACTICA) with the option of more movies, or a series, later.  The plan was scrapped when Universal clawed back the first TV movie and released it as a movie.  Before going back to the broadcaster and signing a deal for the weekly series... which just happened to include that recent blockbuster 'movie'.

Funny also to see that the lack of really alien aliens is signposted from the get-go and also funny to see that Tigerman gets a mention as - on screen - he's essentially just a fat body builder in a cheap costume. 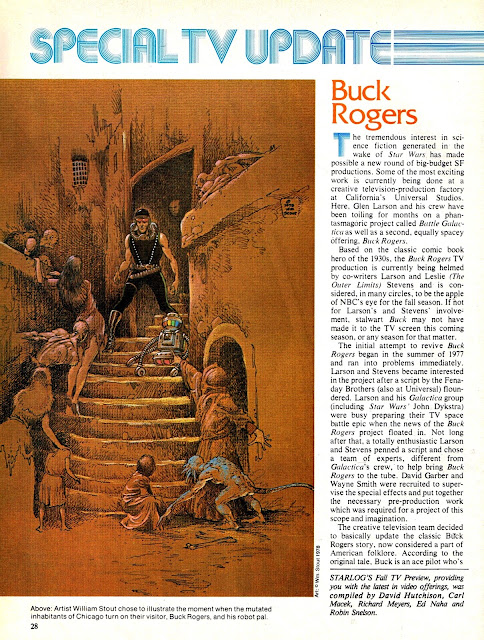