From VHSville: CBS released the first trailer for the new STAR TREK DISCOVERY TV show yesterday... and fandom of course went into meltdown.  Rather than just be chuffed that what was essentially a dead TV franchise (and not doing that well at the movies either) is being revived with what looks like a whopping budget, they decided to fixate on having to pay a few dollars-per-month to watch the show on the CBS streaming video platform in the States (it will be on Netflix in other markets) and debating why the show - set before the Kirk/ Spock era doesn't look more like 'The Cage'.

The first gripe seems to be that they have never had to pay for Trek before (except for the tapes, discs, books, comics, action figures, magazines, movie tickets and a million other bits of merchandise) so why should they start paying now?  They don't seem to understand that the TV marketplace has changed and that Trek, frankly, exhausted, the old routes to air by being squeezed out of first-run syndication (partly because previously independent stations were turning over their airtime to new webs like UPN and CW and partly because Paramount had flooded the market with reruns of the other series in the franchise) and then network TV (UPN, despite all the problems at the ownership level and the frequently changing programming priorities, did stand behind Trek for over a decade) when UPN and WB finally merged after a decade of slugging it out in an ever-shrinking fish pond.

CBS is using Trek to drive recognition and uptake to their new subscription service.  Broadcasters know that linear broadcasting is going to be a game of diminishing returns from now on and they need to stake a claim in the new world order or risk a few big players controling the content and the business deals.  Filling 24-hours of broadcast content is looking increasingly like hard work when you can concentrate cash and resources into fewer titles, that punch harder, which viewers can dip into whenever they want.

Fans should be celebrating that Trek is coming back to TV... and that CBS is willing to bet the farm by using it as a cornerstone for their new venture.  Trek has a bold tradition in leading broadcasting innovation.  Paramount pondered launching their own TV network in the late Seventies (that ultimately went nowhere when the advertising sums didn't add up) prior to STAR TREK: THE MOTION PICTURE; again when they used TNG to open up the syndication market to first-run quality drama and yet again when Trek anchored their UPN venture with Chris-Craft in an attempt to get into the network business to avoiud being squeezed out by legislation that allowed - for the first time in decades - the network's to own the shows they aired.

So... here is a fairly random STAR TREK: THE NEXT GENERATION VHS cover from back in the day when British fans had to pay over a fiver per episode to get the latest episodes or wait months (or years) for them to appear on Sky One (subscription alert!) or BBC TWO.

As for the second... Yup, it would make perfect sense to make the cutting edge remake look like a 50+ year old show. 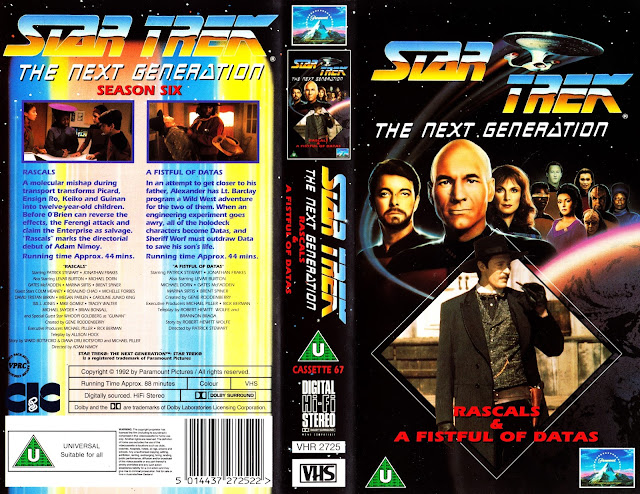