After a week of waiting to find out what the latest exciteing development from the South Bank would be... it just amped up again!

Four extra pages!  Nine 'great stories'!  A spud gun! File that one under: freebies you are unlikely to see today.

What's not to love?

I assumed that the illustrations were just for consistency.  It never crossed my mind that Eagle was about to abandon the photo-strips for good.  Four extra pages also sounded a pretty good deal.  But the IPC ad men had neglected to mention that the trade-off was that the weekly, previously one of the best looking on the shelves, was about to switch over to the newsprint formula already adopted (one suspects with no great enthusiasm by their editorial teams) by most of the rest of the Youth Group.  The con was - very much - on. 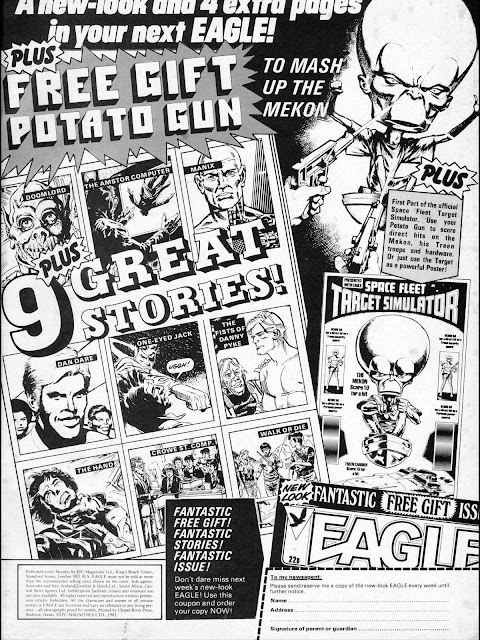 Email ThisBlogThis!Share to TwitterShare to FacebookShare to Pinterest
Labels: 1983, EAGLE