From the last days of tape: The first of several volumes of BUCK ROGERS IN THE 25TH CENTURY episodes released on VHS in the UK by Universal-Playback.

Typically,/ the episode selection is a little random.  But considering how little of the series was available, I wasn't complaining.  The Awakening (aka the pilot) was the TV edit of the opening episode.  The (slightly) different feature film version (the one that most casual fans are familiar with thanks to regular outings on ITV and then the BBC) was given away (in a cardboard slipcase) as a bonus freebie if (from memory) you bought the first two full-price episodic releases.

The TV edit was actually much rarer in the UK.  Both ITV and the BBC skipped the opener when they launched their runs of the series because of the movie print.  ITV couldn't air the movie until after they had aired the series and BBC TWO had to skip it because ITV still (for a while longer) held the rights.  When they did switch to the BBC, they aired the movie print (the one with the slightly more suggestive script and the sub-sub-BOND title sequence which was meant to be - I assume - Buck's extended wet dream during his 500 year sleep).

RETURN OF THE FIGHTING 69TH is one of the more interesting first season episodes... not least because it includes a pretty well realised asteroid sequence a good year-or-so before the release of THE EMPIRE STRIKES BACK (as with the whole GUN ON ICE PLANET ZERO/ Hoth coincidence, I wonder whether the LA effects community gossiped too much and allowed Universal to jump ahead). 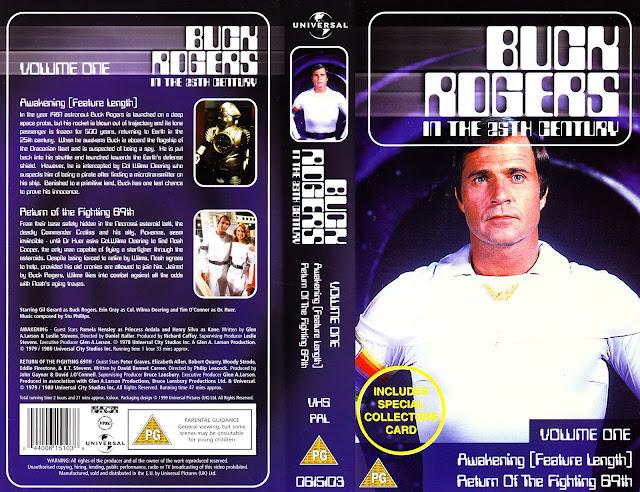 Email ThisBlogThis!Share to TwitterShare to FacebookShare to Pinterest
Labels: BUCK ROGERS IN THE 25TH CENTURY