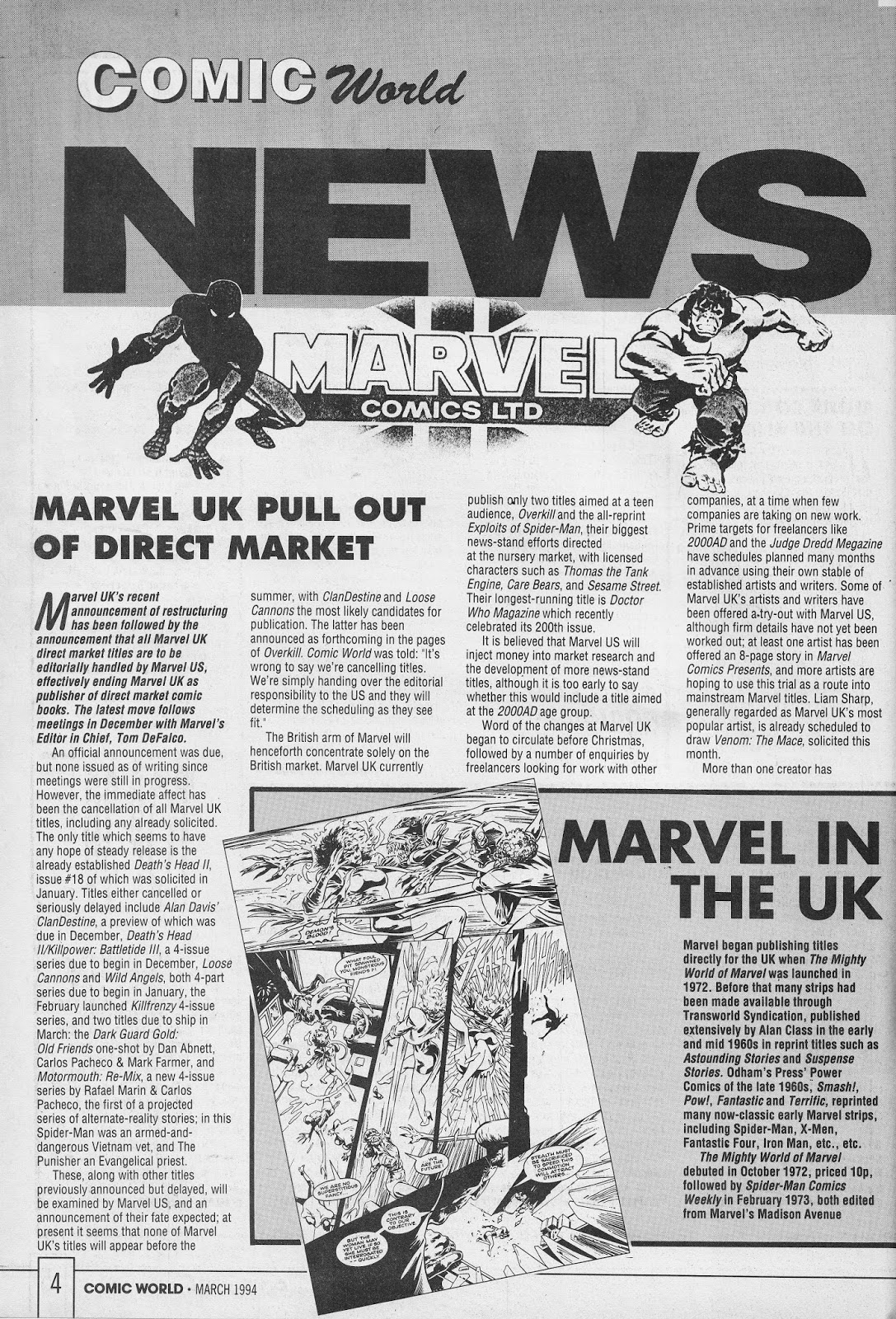 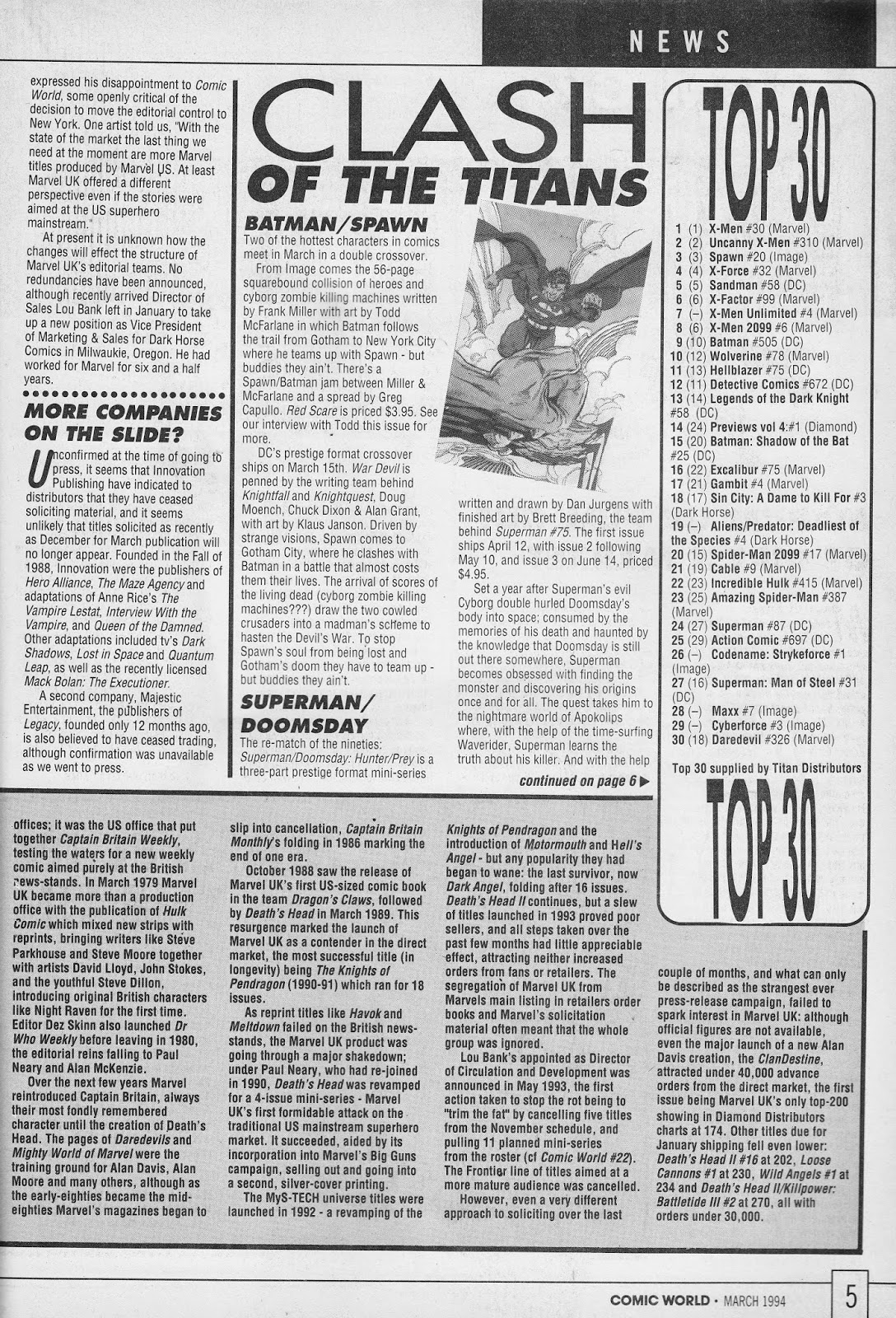 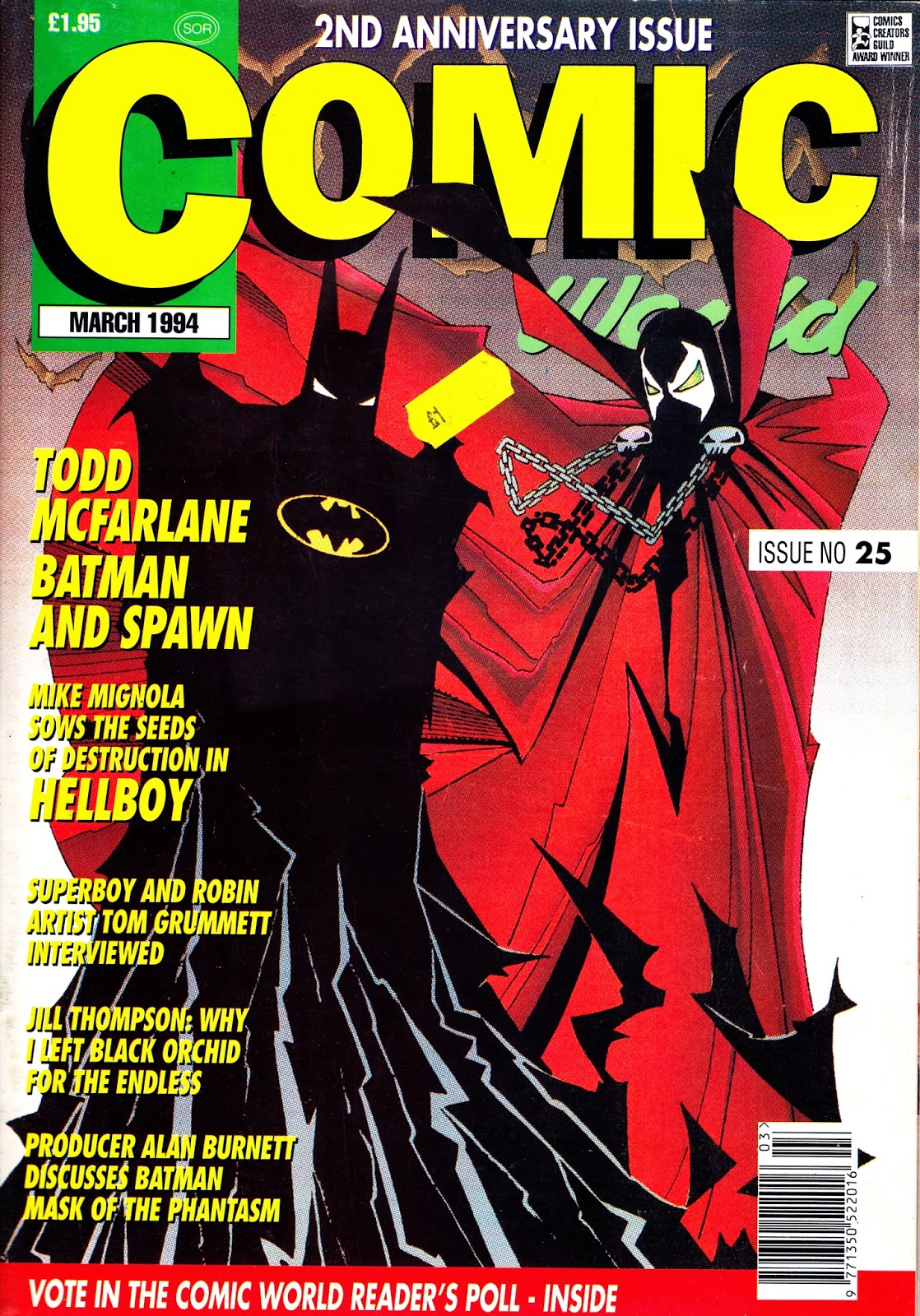 The cuts of late 1993 hadn't boded well for the Annex of Ideas, stalling a lot of upcoming UK-Verse projects (and closing some existing titles and the entire FRONTIER imprint) in an attempt to avert the glut of new material flooding into a collapsing market (presumably calculated, at least in part, by which of the imminent releases had still managed to generate reasonable orders from retailers and distributors) but this was total wipe-out.

All of the 'parked' projects (many of which had several issues already completed and more partially-completed and work-in-progress) were officially scrapped and any title that had managed to escape the implosion was also cancelled.

To get a sense of how bad things were at the end:  According to Capital Distributors (long-gone in the great distributor shake-up of the nineties - thanks Marvel - but big at the time and publisher of their own version of PREVIEWS in the form of ADVANCE COMICS), retailer orders for the 16th, and final, issue of DEATH'S HEAD II were down to 7,400 copies.  A far cry from the 105,900 they had moved of the first issue in late 1992.  CYBERSPACE 3000, another last survivor, had seen 55,400 copies of its first issue shifted through Capital but, eight months later, that figure had plummeted to 4,350 for the finale.

It's worth noting that, in today's much reduced industry, numbers like this probably aren't exceptional.  And, of course, Capital wasn't the only distributor handling M-UK product so these are far from final figures.  And they have to be seen in the context of an over-expanded business which was going through some very drastic right-sizing.  Sales were down across the board although, as many of the M-UK books were seen as peripheral to the main Marvel offering, they were more vulnerable to readers and retailers trimming their sails.

The few survivors of the massacre were:
CLANDESTINE which had initially been slated for January '94 and eventually appeared, under the auspices of Marvel New York later in the year.
DOCTOR WHO: AGE OF CHAOS had been placed on indefinite hiatus in the Implosion but, although plans for a four-issue US run died here, it did surface in the summer of 1994 as a one-shot magazine-format special in the UK.  Work was still ongoing when the US version was abandoned and, as a result, yet-to-be-drawn splash pages were dropped.  To date, it has never been reprinted.
WILD ANGELS was to have been a four-parter for a January '94 premiere (House Ads appeared in other M-UK books) and eventually surfaced, presumably because Pino Rinaldi supplied the art, as a black and white digest compilation courtesy of Panini's Italian division.

A lot of seemingly commercially still viable work was also lost in Marvel's haste to draw a line under the whole experience.  The LOOSE CANNONS four-parter had already generated a fair amount of heat in the fan press and looked like a potential winner (if not in its original format, possibly in book form).  The DEATH'S HEAD II/ PUNISHER combo, scheduled for 1994, probably sounds more juicy now than it did at the time considering how frequently both characters popped-up in every conceivable crossover and cameo.  Nevertheless, it might have started DHII's rehabilitation and integration into the US-verse.  A lot of the other books, from creative teams that latterly became big industry names, seem greater losses in retrospect than they did at the time (which is not, of course, to underestimate the sense of disappointment and sense of loss (and loss of income) of anyone who has toiled on a creative project only to discover it would never see the light of day).

The UK-verse was left in the care of Marvel New York but, frankly, they didn't seem to notice.  The collapsing industry, and Marvel's over-extended financial obligations, were a sufficient distraction for staff (those that survived the regular restructurings and rounds of redundancy) to prevent anyone (until this year) taking a punt on a roster of failed characters.

Marvel also had their 2099 future-universe to play with.  Launched in 1992, it was more commercially viable because it feature possible-future (so, like the M-UK books, it had no real impact on Marvel's main universe) versions of bankable characters.  It still petered out in 1998.

Marvel acquired the MALIBU ULTRAVERSE in late 1994 (the official reason, to snap-up Malibu's state-of-the-art coloring technology, was a smokescreen to hide the real reason: DC were about to pounce on the very busy upstart and Marvel's owners were concerned that a sale would cost them their position as numero uno in the industry, vital for keeping the share price inflated) and promptly tried to integrate the characters into the Marvel line.  Plenty of crossovers followed but Marvel eventually ran the whole thing into the ground... and (for various legal and financial reasons) hasn't touched the characters since.
Posted by SLOW ROBOT at 08:15